This report outlines the results of an independent 3rd Party project to assess the performance of a range of 802.11n WiFi hubs. The tests were conducted between 15th and 30th June 2012. The tests assessed the range of various wireless routers by measuring throughput of the routers in various locations in an occupied domestic property in urban south-west London. During the tests, files of data of multiple sizes were transmitted from a test server to a laptop via the router. The laptop was moved around different locations of the home. In each location, the orientation of the router was also changed to create multiple test scenarios.

Sky UK has developed a new 802.11n router to provide broadband Internet access to its many customers and to allow the creation of home networks in order to distribute Internet and other data. The relative performance of the range of signal transmitted by routers offered by other UK major Internet service providers was assessed. The study considered the following routers:

The results of the testing have been consolidated from:

Each throughput test consists of repeated transfers in which all the files in a remote folder are transmitted from the test server via the router to a test laptop. Each folder contained ten files of random size (bytes); each folder is then transmitted ten times. This sequence is repeated per router orientation in the different locations of the property in different orientations. The router always remained in the same location, whilst the laptop was moved around different locations. The reported metric is the amount of data transferred divided by the time taken to transfer that data, and then averaged across the different locations of the property. To mitigate anomalies in testing (associated WiFi variability or interference for example) the lowest half of results for each router were discarded with the reported result being the average of the top half. Where variability is high, performing ten folder transmissions at the largest size is sufficient – as has been adopted in this test measurement.

Site-1: Urban terraced house: The site for testing was a brick-built Edwardian end-of-terrace house in south-west London. The area is zoned for planning purposes as residential and light industrial. The following test locations within the property were used. All routers were tested in two to three different orientations within each location.

A) Rear bedroom (most obstructed position): A rear bedroom was found by experiment to be the most obstructed location in the house. The room is on the first floor and the path traverses two walls, a floor and a bathroom. 2 separate positions in distinct locations within the 2nd bedroom were tested, in multiple orientations. B) Garden: Testing conducted in the rear garden on the property. The distance from the router was 19.0 m.

These locations were selected as they represent the best test of ‘range’ – obstructed paths and at distance.

Site-1: Urban terraced house: Sky Hub performance is found on average to be better than all other UK major ISP’s as per testing conducted in obstructive paths in various locations in the home. Performance took into consideration different test locations in different orientations and results averaged. These are the locations best representing ‘range’, the results of which demonstrate that Sky Hub performance is on average best out of the four routers tested. 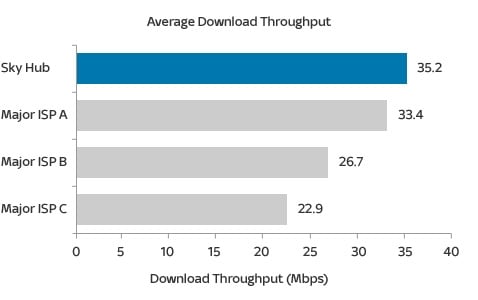 Only 1 client orientation was tested in each location at the Site -2 and the Sky Hub was tested against the leading competitor router from the results of Site -1. The location tested was the bedroom.

The second site, Site-2 for testing was a detached home near Petworth in West Sussex.

RESULTS: The Sky Hub performs better than against Major ISP A in the obstructed scenario. Results were averaged across the different routers used in testing. Major ISP A was the best performing competitor router in the urban terraced home testing scenario. 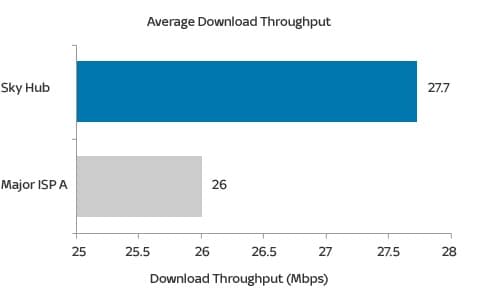 Sky Hub has better performance than all other UK major ISP’s in long distance/obstructed pathway scenarios. This was established in the urban home testing across various locations and different router orientations. This is further supported by the testing in the Petworth home where Sky Hub range was better than the best performing of the three other major ISP’s.

When focusing on the averaged results in obstructed path locations and at distance, also obstructed, the Sky Hub has the best wireless range (as measured by throughput).